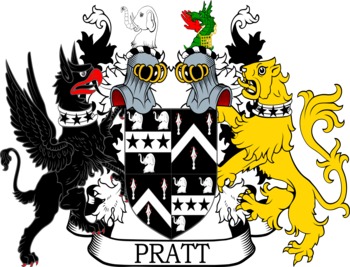 Design your own PRATT Family Crest

Recorded in various spelling forms including Prett and Pritt, this interesting surname is of Anglo-Saxon origins. It is derived from a pre 7th century word "praett" meaning a trick; and as such was probably a nickname for a magician or conjuror. It is an example of that sizeable group of early European surnames that were gradually created from either an occupation, or from a variety of characteristics, such as physical attributes or peculiarities, mental and moral characteristics, and to habits of dress.

This surname is derived from the name of an ancestor, 'the son of Prat'.

An English nickname for a clever trickster, from Old English prætt ‘trick’, ‘tricky’, ‘cunning’ or signifying deception, which was found in use as a byname in the 11th century.

From the Latin Pratum, a meadow. In the Dutch, Prat also signifies proud, arrogant, cunning.

George Pratt, English convict from Hertfordshire, who was transported aboard the "America" 4 April 1829, settling in New South Wales, Australia.

In 1881, the surname was widespread especially in England. Hertfordshire was a top county of the surname with 204 occurrences.

In 1891, the surname was recorded in England and Wales with 16,188 occurrences and a fewer 613 occurrences in Scotland.

John Henry Pratt (1809 – 1871) was a British clergyman, astronomer and mathematician. He wrote a book called Mathematical Principles of Mechanical Philosophy in 1836, which described mathematical applications in gravitational physics.

George Dupont Pratt (1869 – 1935) was an American conservationist and philanthropist.

from Pratt to de Pratelles - I thought this name came from France with the Norman Conquest.

Areas of Origin for PRATT

Write an email address and click 'Invite' to share this page with more members of the PRATT tribe.

Discover where the PRATT Family members live around the world

Show off the PRATT Family Crest…