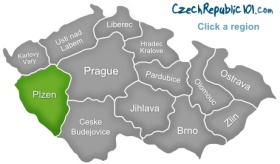 Also known as the European capital of culture, the province of Plzeň (known as Pilsen in English) is a melting pot of different cultures, the result of its geographical location between Prague and Germany. An integral part of Western Bohemia, the region is located close to the sea and hosts the confluence of four rivers- the Mze, Radbuza, Uhlava and Uslava. Enjoying an oceanic climate characterised by long dry summers, Plzeň has hazy winters and short warm spells of spring and autumn, while rainfall is low and evenly distributed throughout the year. Pilsen is also an important hub for economic activity and a major contributor to the national GDP of Czech Republic. Over the last two decades, the region has witnessed a marked increase in Foreign Investment which has undoubtedly boosted the economic strength of the region and foreign players such as Panasonic and Daikin have invested in the region alongside Skoda transportation and Skoda Power. And then there is the beer tourism, since this is also where the process of “Bottom Distillation” was discovered by the famous Bavarian brewer, Josef Groll. Its unique history, spirit and architecture make Plzeň an important tourist attraction and it is the fourth largest urban area in the nation overflowing with Czech taverns, charming streets and imposing historical structures. The Cathedral of St. Bartholomew has the tallest church spire in the country and can be seen looming on the city’s skyline from the city centre, a remnant of the glorious days of old, while the amalgamation of different cultures finds a beautiful expression in the Moorish Revival Great Synagogue, situated in the city of Plzeň. Another highlight is the Renaissance Town hall or a tour of the city’s famous beer distributors, the iconic Pilsner Urquell and Gambrinus breweries. In the Chodsko region, you can find a living tribute to the colourful folk traditions of the Plzeň region, where the laidback town of Domazlice is an idyllic and picturesque town while there are also several more attractions in the province such as the small cultural village of Klenci and Sumava National Park which is a favourite for outdoor activities. Prosperous and of important cultural importance, Plzeň is another uniquely fascinating region in Czech Republic.