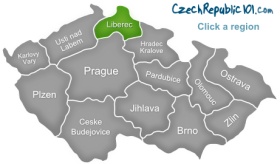 The province of Liberec, a major industrial hub, was once the centre of a thriving textile industry which was lovingly nicknamed the “Manchester of Bohemia”. In recent times, the predominance of the textile industry may have declined, but the region continues with a distinct vibrancy and remains an integral part of Czech Republic. Situated towards the north of the nation, Liberec shares its borders with both Poland and Germany, dominated by the western foothills of the Giant Mountains and Jizera Mountains, the northern part of the Czech Basin and the eastern portion of the Luz Mountains. In terms of location, Liberec has a bounty of natural beauty making it perfect for seasonal activities, including Winter which is idyllic for both Alpine and cross-country skiing. For this reason the Jested Ridge, the Giant and Jizera Mountains are a natural attraction for tourists and locals alike with a number of beautiful trails favoured by outdoor enthusiasts. As summer arrives, the region adorns itself in all the serenity that nature has to offer as rock climbers take to the Bohemian Paradise and locals travel by bicycle across the stunning valleys or enjoy a dip in the pristine waters of the Macha Lake. Although, the importance of Liberec as a textile hub has declined, the region still continues to be an important industrial centre with the glass and jewellery industries still growing. Moreover, the region has also made a name for itself in the production and processing sectors as several plastics and engineering plants find themselves assisting the automobile manufacturing sector. Another prominent feature are the number of technical institutes providing a fresh influx of talent to sustain the industrial activity in the region. Naturally the above mentioned scenery combined with a colourful history has also brought much tourism to the the local area, where medieval castles and fortresses are common and ideally situated with a backdrop of the beautiful Jizera Mountains. Once inhabited by German and Flemish immigrants, the entire city holds specimens of Flemish as well as neo-classical architecture including an imposing town hall that forms an important landmark in this city of old churches and cobblestone streets. Another important architectural landmark is the Jested Tower, constructed atop the sprawling Jested mountains, for this aerodynamic circular hotel adopts the slope of the hill itself to rise gradually into a needlepoint. Thus, the Jested Tower appears as a natural extension of the hill and is unsurprisingly referred to as the most recognisable modern architectural structure in Czech Republic. While the region is also a well-known cultural centre as seen in the North Bohemia Museum and Regional Library, Liberec is a historic destination with a strong economy and enough natural beauty to make it worthy of a visit.