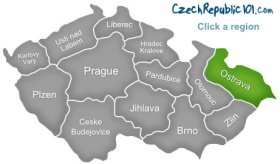 The capital of the Moravia-Silesian region, Ostrava is the third largest city in Czech Republic. Located on the historic Amber Route that formed the passage from the Baltic Sea to the Mediterranean, the city has experienced economic prosperity for a long period of time. After the discovery of coal, the it became one of the largest steel manufacturing hubs in Europe and although these coal mines closed down during the last decade of the twentieth century, the perfectly preserved mining museums in the city provide enthusiasts a unique insight into the industrial nature of nineteenth century Europe. With a rich cultural heritage complemented by a unique technological perspective, Ostrava is a fascinating place to discover and is slowly establishing itself as one of the sought-after Czech destinations.

The city is located in a low-lying fertile river basin also known as the Moravian Gate. Four rivers- the Odra, Opava, Ostravice and Lucina meet in the basin, providing a steady source of vitality for the region. The region experiences a typical Central European climate characterised by humid summers and mild winters. A historically industrial town, Ostrava continues to attract major investment capital even today with multinational brands like Siemens, ArcelorMittal and Tieto setting up shop in town and there are also four major universities in the city, providing a steady inflow of talented resource.

Ostrava’s town square, also known as the Masaryk Square is one of its major tourist attractions. Around the square are imposing buildings designed by Europe’s Crème-de-la-crème, like the Schonhof and the Reisz. A plague column bearing a figure of the Virgin Mary that dates back to the early eighteenth century and a statue of St. Florian adorned with Baroque architectural elements are other visual delights that greet a visitor strolling about the Masaryk Square. A little further from the square, at the confluence of the Lucina and the Ostravice, stands the once imposing Silesian Ostrava Castle.

Visitors can enjoy a panoramic view of the entire city from atop the 73 m tall tower at Ostrava’s New City Hall. Another highlight are the Black Meadow exhibition grounds, one will encounter the stunning world of Miniuni Miniatures that feature the likeness of some of the world’s most remarkable buildings. After feeling like a giant strolling amidst the miniature attractions, one might choose to head over to the Puppet Theatre where a Fairy Tale clock lights up every two hours for a two-minute puppet show depicting the battle between Kasper the Clown and the Grim Reaper.

Every day, a large number of people visit the Lower Viktovice to admire its historical blast furnace, the iron works, the old power plant, the compressor room and ride the glass elevator to a newly built viewing platform that offers sweeping views of the entire city. One can gain an insight into the life of the miners at the Michael Colliery and Landek Park Mining Museum with the latter even offering the opportunity of a tour in the former Anselm mine and a descent into a simulated mine tunnel.

Ostrava is a city like no other where colonial architecture coupled with the remnants of its industrial past provide a unique cocktail of unforgettable experiences which until recently, had been largely undiscovered.