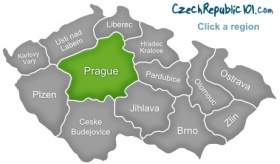 Widely hailed as one of the most beautiful cities on earth, Prague, the city of a hundred spires is the urban adventurers’ delight. A collage of hidden gardens, majestic works of art, fascinating architecture, laidback cafes and breweries serving the best Czech beers, Prague entices you with a certain allure which is hard not to succumb to. As the present capital of the Czech Republic, the city has experienced peaks and falls in fortune throughout thousands of years that have eventually shaped the vibrant Prague that can be found today through its alleys and squares.

Located on the banks of the Vltava River, Prague was once the capital of the historical Bohemian region and bears evidence of the Baroque, the Gothic, the Renaissance and the Romanesque eras throughout which it flourished and assimilated their influences into a unique milieu.

Due to its location on the Bohemian basin, the city enjoys an oceanic climate with relatively colder winters. It is one of the most economically prosperous parts of the country with the lowest rates of unemployment, although it has attracted a large amount of investment especially in the service-oriented sectors such as food-processing, pharmaceuticals, printing and electrical equipment manufacturing are important industrial sectors. Tourism is also a huge source of income for the city and it is favoured as a popular filming location by the international film fraternity.

The charm of Prague attracts millions of tourists from all over the world and delights the visitor with an exuberant Old town square with architectural beauty and a very rich cultural heritage as evidenced in the large number of art galleries. The city managed to escape most of the brutalities of the World Wars and preserve a pristine collection of architectural styles across the spectrum, ranging from the Romanesque, Gothic and Renaissance to the Neo-Classical, Cubist, Art Nouveau and the Ultra-modern.

The Old town square forms the heart of the old town of Prague and is overflowing with attractions including the beautiful gothic buildings, the Church of Our Lady before Tyn, the Old Jewish Cemetery, the Spanish Synagogue and the Powder Tower. Another highight is the Clam-Gallas Palace which provides a beautiful sample of Baroque architecture whereas the Municipal House stands proud embracing art-nouveau.

On the other side of the river is the New town, with the Wenceslas Square forming the core of activities. Here you can see brilliant examples of modern architecture like the deconstructivist Dancing House by Milunic and Gehry. The National Museum and National Theatre are important examples of Neo-Renaissance styles. The iconic 14th century structure of Charles’ Bridge is arguably the most frequented part of Prague.

Towards the north is located Hardcany and Lesser town with the ancient Prague Castle, reminiscent of medieval glory. Baroque elements are visible in the Pisek Gate and the Saint Nicholas Church. The Franz Kafka Museum is another example how the city has preserved its cultural heritage. From the Kampa Island, you can enjoy a sprawling view of the Charles’ Bridge.

Prague is an enchanting town, one whose charms you cannot escape. You fall in love with the city with every turn of every corner, culminating in the awe inspiring beauty of the infamous hundred spires.