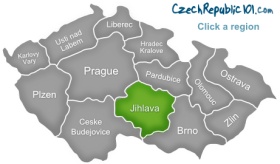 The city of Jihlava derives its name from the River Jihlavka on which the city was first established. The river forms a natural border between the historical regions of Bohemia and Moravia, thus giving the city a unique geographic location, while Jihlava, the capital city of the Vysocina region, is in fact the oldest mining town in Czech Republic and another city of historical importance for the nation. Jihlava belongs to the comparatively colder regions of Czech Republic as the annual temperature of the Vysocina province stays within the range of 5-7 degrees centigrade. Historically, economic activity had not ravaged this region as much as Bohemia or Moravia and it continues to thrive on agriculture. Once among the poorer regions in Czech Republic, Vysocina had managed to escape the brutalities of environmental damage and is today deemed to be one of the fastest growing economies in the nation. Together with Kutna Hora, the city of Jihlava was once referred to as the silver treasury of the Czech kingdom and a labyrinthine of underground tunnels that historians believe were once used to serve economic purposes in this time can be explored by tourists today. Also known as the Underground Tunnels of Jihlava, these catacombs are 25 km long and located beneath the ground level at the older part of the city and an interesting feature of the catacombs is the mysterious luminous passage. In this part of the network, the tunnel walls continue to glow without artificial lighting, thus serving as an illumination source. A short distance from the town centre, a zoo houses large cats, reptiles and monkeys, while a 110 km long path extends from Jihlava to the city of Raabsan der Thaya aides long distance cyclists and skaters who might be interested in a cross-country adventure. It has always been an important cultural centre and was home to the famous composer Gustav Mahler was born here and an exhibition in his home continues to provide an insight into his life and works. And then there is the Documentary International Film Festival, one of the largest creative documentary festivals in Europe. Jihlava is a surprise in many ways, for it offers a variety of unique attractions, none more so than a historic journey through the underground tunnels. Regardless of the negative affects in neighboring regions, the capital city of Vysocina is moving forward without forgetting its past.