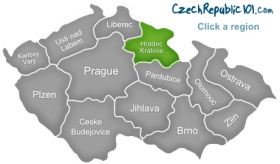 Located in the north-eastern part of the Bohemian region, Hradec Kralove is the ninth largest administrative province in the Czech Republic and shares its borders with Poland as evidenced in the overlapping heritage within the province. Towards the north, it is surrounded by hilly areas with the remainder lying in the Elbe or Oder lowlands which are largely irrigated by the river Elbe and its tributaries. Hradec Kralove enjoys a strong economy resting on the pillars of both agriculture and industry, while also being complemented by tourism. Agriculture is particularly predominant in the Kolbe lowland with a number of electrical and mechanical equipment manufacturing companies taking their place. And then there are the food processing, manufacturing and petrochemical plants that thrive throughout the region. In fact, rapid industrialisation has harmfully affected the delicate ecological balance in the locality and Hradec Kralove is known to be part of the Black Triangle, an area of heavy industrial activity that has unfortunately caused much damage to nature in the region. With a moderate climate, characterised by dry warm spells and bleak winters, temperatures are lower in the hilly regions of the north, as too is rainfall. This suitable climate combined with natural attraction ensures that the region is a favourite for outdoor enthusiasts, particularly the rock formations at Adršpach-Teplice Rocks and Prachov Rocks, where classic examples of steep rock formations are ideal for extreme outdoor activities. Hradec Kralove is stunning in a natural sense and Krkonoše National Park is another testament to this fact, with many hiking trails to appreciate the luscious surroundings. Near the Polish border you can find the town of Broumov, well-known for its peaceful atmosphere and famous monastery, while the Josefov Fortress and Krost Castle are further historic locations that continue to embody the medieval architecture in Czech Republic. The capital city of Hradec Kralove is also a rich cultural centre, infused with beautiful theatres, concerts, museums and a particular taste for art which never fails to impress the visitor. Although industrious, Hradec Kralove is a scenic province with a strong focus on outdoor activity and provudes an opportunity to explore some of the finest scenery in the Czech Republic.