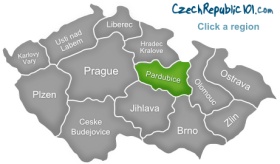 Famous for its horses and gingerbread, Pardubice is the fifth smallest region in Czech Republic, a part of which lies in the north-western part of the Moravian region while the remainder rests in the eastern part of the Bohemian region. The North-eastern, southern and south-eastern parts of Pardubice are lined by mountainous ranges and the Polabi lowlands lie on the central and western parts of the region. Located on the Elbe River, the capital of Pardubice is a beautiful city steeped in history, culture and spirit. The iconic Renaissance Chateau was built in the late fifteenth century and the interior is decorated with the earliest Renaissance Frescos in Bohemia. Today, the famous chateau serves as a centre for important social events, theatres and concerts while boasting unrivalled views of the city. A large part of the province also finds itself in the drainage basin of the North Sea (Elbe) and for this reason a number of rivers flow through the region. The tripoint of the Black Sea, North Sea and Baltic Sea watersheds is located in the region here and Pardubice enjoys a continental weather characterised by warm summers and cold winters. Naturally, the Polabi Lowlands record a higher annual temperature whereas the hilly regions in the North-eastern part of Pardubice are considerably colder. Industry, agriculture and tourism are the mainstays of Pardubice’s economic activity and the majority can be attributed to agricultural activities. Renowned for being the largest chemical industrial sector in Czech Republic, Pardubice is also home to Synthesia, a major exporter of cellulose and pigments to other EU nations and the inventor of Semtex, a plastic explosive. As mentioned, the region is the ‘Gingerbread heart of Bohemia’ which has attracted a large number of confectionery stores who mass produce flavoured gingerbread that are then shipped around the world or sold as souvenirs to tourists. Pardubice is also well-known for a number of sporting activities including ice-hockey and horse racing. In fact, horses have been a part of the Pardubice emblem from centuries and the city acts as the venue of one of the toughest races in the world - The Velká Pardubická Steeplechase. Infused with hidden charm and particularly unique points of interest, the region of Pardubice and the enticing aromas of gingerbread gracing the streets are a reminder that every part of the Czech Republic has its own story, regardless of their lesser known stature.