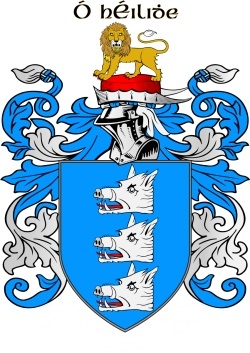 Design your own HEALY Family Crest

Ó hÉilidhe - anglicised as Healy, Hely, earlier as O Hely, (O) Hally &c. The root is ealadhach, 'scientific, ingenious', according to Woulfe in 'Sloinnte Gaedheal is Gall' (1923), though MacLysaght disagrees, and gives the root as eilidhe, meaning 'claimant', in 'Irish Families' (1985).

The anglicised form Healy coincides with an English surname from one of the places so-called in Yorkshire, Lancashire and Northumberland, Old English 'heah+leah', or 'high clearing'. Healy is of that class of common Irish names whose anglicised forms coincide with British names, v. Appendix*. A few English immigrants, soldiers, officials &c. bearing such names would have been in Ireland, esp. during the 17th century, without affecting the majority Gaelic provenance of these names.

The Ó hÉilidhe family were anciently of Co Sligo, inhabiting the area around Ballyhely, Baile Uí hÉilidhe, their former lands lying along the western shore of Loch Arrow. The Cromwellian 'Expugnatio' of the 1650s initiated a decline in their fortunes. 'Castles are sacked in war, Chieftains are scattered far...' (Gerald Griffin). However, Woulfe (op.cit.) writes that the name had spread across Connacht and into Leinster as early as the 16th century. The arms shown above, are of this family.

Ó hÉalaighthe was the name of a family of Muskerry, Muscraighe, in Co Cork. Like the above family they were divested of their ancient territories during the great Expropriations of the Cromwellian period, but were regained in part by the conversion of one of their clan to the Protestant faith, probably Francis Healy of Kilshannig (fl 1720) From this act of prudence came the later title, Earl of Donoughmore, the latter name being a place in their ancient holdings. A son of the aforementioned Francis, married into the Protestant Hutchinson family, and changed his name to Hely-Hutchinson. This gentleman, John Hely-Hutchinson (1724-1794) was M.P. for Cork and Provost of Trinity College, Dublin. One cannot help contrast the fortunes of this family to those of the majority of Healys who had held to their traditional faith.

By the time of the 1659 'Census', undertaken by Cromwellian bureaucrat Sir William Petty, the surname is listed as a 'Principal Irish Name' in the wollowing counties:

William O Hialyhy (fl. 1615) of the Cork Healy family, became a Protestant clergyman and Chancellor of Cork Diocese 1610-1632. A memo in the Fiants, says of him 'noe graduate, his wife & children goe to Masse'!

James Augistine Healy (1830-1900), first black American bishop in the U.S.A, the Catholic Bishop of Portland. His father, Michael Morris Healy, an immigrant from Co Roscommon, and later plantation owner in Georgia, married one of his slaves, Eliza Smith, who was of 'mixed race'. They had a common law marriage, as state law prohibited inter-racial marriage.

My family came from Kilmacow in Kilkenny. I have managed to find an Edmund Hely in 1793 in Newfoundland Canada, from Kilmacow. Also I believe Andrew Thomas Healy born circa 1780 in Kilmacow to be a direct descendant. I don't believe he left Ireland. Any information is appreciated.

James Madison Haley Born November 15, 1840. Lived in Kent’s Store , Fluvanna County, Virginia was a descendent of two Haley brothers that migrated to the United States during the potato famine. I’m not sure how to find out where in Ireland they came from. James Madison Haleys father I think was William Haley married to Elizabeth Moss.

Trying to get some info on my great great great grandfather Hugh O'Healy born Cork 1853 to John O Healy and Mary Martin. I don't know where in Cork he was born but I know he and his brother Patrick emigrated in 1871/2. They were settled on a small farm in Big Stone County Graceville Minnisota under the catholic colinisation scheme of Bishop John Ireland of the twin cities Minnisota. I have been searching for some trace of John and Mary but can't find anything on them at all. I would really appreciate any pointers to finding out where in the county they lived. Thank you for your help Liz

(Part 1 of 3) The Healy name has a long history in Ireland, but now DNA and some recorded history says its origin is from the south-west region of the Emerald Island. The Healy story [dominated by DNA tribal marker R1b-L513, Subgroup O2] can trace their beginnings to what is now County Kerry from 50 BCE. Perhaps the journey begins with the Clanna Dedad; Deda, son of Sen or Deda Mac Sin. The Healy surname origin is possibly a branch of what will become the Dáirine [R1b-L513] who are found in south Ireland around 300 CE.

(Part 2 of 3) According to research, the Dáirine will join with the Dál Riata of north-east Ireland and invade Scotland around 500 CE. But how could this be? Recent discoveries from DNA testing are unlocking the migration patterns of Celtic tribes as late as 800 CE to 1200 CE. The Healy story begins in pre-history Ireland but many of his descendants will then move to Kintyre, Scotland where they and other R1b-L513 members will form the Dalriada. This line and many of his kin will then travel to Brittany, France during the Dark Ages.

Areas of Origin for HEALY

Write an email address and click 'Invite' to share this page with more members of the HEALY tribe.

Discover where the HEALY Family members live around the world

Show off the HEALY Family Crest…