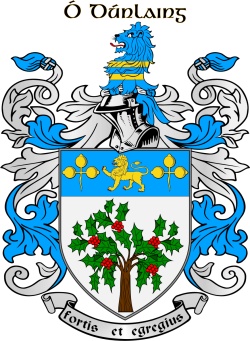 Design your own DOWLING Family Crest

The Ó Dúnlaing (pronounced Ó Dúllaing) probably form the majority of this name. Once Lords of Leix (modern Co Laois), their homeland was known as Fearann ua n- Dunlaing 'O' Dowling's Country'. One of the 'seven septs of Leix', they were a powerful and numerous sept, spreading east into Carlow and Kilkenny. Several leading members of the sept were transplanted to Co Kerry by the English in the early 17th century. Another sept of the name were in south-west Ireland; they were of the Corca Laoighde, they also were numerous.

The Ó Dubhlainn were of the Uí Maine in present day Co Galway.

Ó Dubhláin was the name of many families in different parts of Ireland. The anglicisations of all these names, as with so many others, had a habit of 'falling together' from the 17th century on.

In the Registrar's Report on Births in 1890, showed most Dowlings in Cos Kilkenny, Laois and Dublin.
Most Doolan births were in Cos Louth, Dublin and Cork.

I discovered that one Bridget Dowling resided in Dublin Ireland, was married to Adolf Hitlers brother. He worked at the Shelbourne Hotel in Dublin 2.

https://sites.rootsweb.com/~tdowling/cwVets.html You forget who came to America first?

Looking for as much family history as I can acquire. Any information is very welcome, especially Family Trees & Clan Histories.

I don't know much about my Dowling history. Trying to find all i can.

Michael Benjamin Fawver, Son of Dorothy Jane Dowling. She was born in 1921 in Hamalton, Ohio. USA

@Timothy Dowling was William the brother of Bartholomew Dowling (1823-1863)?

I am a Dowling. Dowlings rule

Hi Jamie, are you the son of Jimmy? Merchant navy character? DúnLaoighre?

Areas of Origin for DOWLING

Write an email address and click 'Invite' to share this page with more members of the DOWLING tribe.

Discover where the DOWLING Family members live around the world

Show off the DOWLING Family Crest…