13,957 CUSACK members around the world 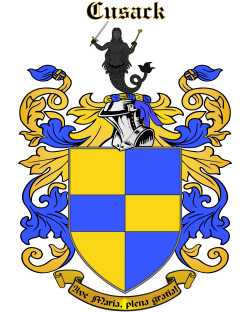 Design your own CUSACK Family Crest

This surname is of Norman-French origin from Cussac in Guienne, an ancient province of south west France, so called from the Gallo-Roman personal name "Cucius" or "Cussius?. Introduced into Ireland in the wake of the Anglo-Norman Invasion of 1169 - 1170, the name was first Anglicized as "de Cussac" and "de Cusack", and rendered "de Ciomhsog" in Irish. The first recorded Cusacks were granted lands in Counties Meath and Kildare. The name also appears in 14th Century records of Counties Clare and Roscommon, where it was Gaelicized as "Mac Iosog" and "? C?os?g?. One famous Cusack was Michael Cusack (Irish: M?che?l ? C?os?g) (20th September 1847 ? 27th November 1906) an Irish teacher and founder of the Gaelic Athletic Association. Cusack also became involved in the Irish language movement, founding The Celtic Times, a weekly newspaper which focused on 'native games' and Irish culture. The Clare GAA pitch in Ennis, and the Westmeath GAA pitch in Mullingar, are both named "Cusack Park" in his honour, as is the "Cusack Stand" in Croke Park, Dublin. Today the name is widespread throughout Ireland, especially in Munster, where it is Anglicized Cusack, Cusick, Cuseck, Cuseick, Kusick, and Kewzick. The first recorded spelling of the family name is shown to be that of Geoffrey and Andre de Cusack, who came to Ireland with King John, which was dated 1211, in "Medieval Records of the Pale", during the reign of King John, known as "Lackland".

Tell us about any famous CUSACK (or surname variant) you think we should add here. We will get our genealogists to check them out and add them to the list. Thanks!

Join the conversation with the CUSACK tribe

Areas of Origin for CUSACK

Write an email address and click 'Invite' to share this page with more members of the CUSACK tribe.

Discover where the CUSACK Family members live around the world

Show off the CUSACK Family Crest…