222,114 CARROLL members around the world 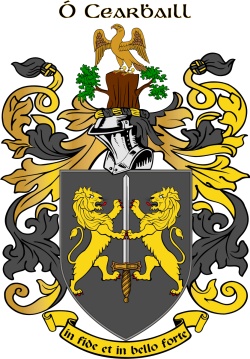 Design your own CARROLL Family Crest

Ó Cearbhaill is the name of several distinct septs in different parts of Ireland. Perhaps the best known is that of Éile uí Chearbhaill or Ely O Carroll, which was centred on the present town of Birr in Co Offally. The territory of Éile, the whole of which the O Carrolls ruled, comprises the baronies of Ballybritt and Clonlisk in modern Co Offaly, and Eliogurty & Ikerrin in northern Tipperary. The Norman Butlers, Earls of Ormond, post invasion, pushed the O Carrolls into the land around Birr, that is, strictly speaking, Éile Uí Chearbhaill (Ely O Carroll). Their eponymous ancestor, Cearbhall, was of the host which fought the Norse and their allies at Clontarf in 1014.

Another sept is that of O Carroll of Oriel. Orghialla or Oriel consisted of the present counties of Armagh, Monaghan and parts of Down, Louth and Fermanagh. This sept were chiefs of Oriel before the Anglo-Norman invasions of 1171/2, when they seem to '...disappear from history. They are still numerous in Monaghan and Louth' (P. Woulfe, 'Sloinnte Gaedheal is Gall', 1923).

Ó Cearbhaill of Loch Léin in Co Kerry is the name of a sept who were chiefs of the Eóghanachta or Eoganacht, a very early tribal dynasty who ruled Munster in the 4th century. It seems this population group had displaced the even earlier, possibly non-Gaelic (cf O' Rahilly) Erainn, and were themselves eclipsed by the Dál gCais or Dalcassians in the 10th century.

Ó Cearbhaill of Osraighe or Ossory (territory comprising most of present Co Kilkenny and western Laois), descend, it is reputed, from the chieftain called Cearbhal who flourished in the 9th century. The Annals of the Four Masters has for the year 845: ' A slaughter made of the foreigners of Ath Cliath (Vikings of Dublin) by Cearbhall macDúnlainge, lord of Osraighe, where 12 hundred were slain'. Some of the north-western portion of Ossory was actually in Ely O Carrol territory, therefore a connection between the Ossory O Carrolls and the foregoing can not be ruled out.

Ó Cearbhaill of Tara, in modern County Meath, were a sept of the Southern Uí Néill, quite distinct from the foregoing. The Southern Uí Néill were the main royal dynasty in Ireland during the early Middle Ages, providing the ard-rí, or high king at Tara.

Mac Cearbhaill, usually anglicised McCarvill, but also as Carroll, is well known as an Ulster name, appertaining to a family long celebrated for its musical talent.

Another sept of O Carrolls inhabited the region of Calry, Calraige Mór, that is eastern Sligo and north-west Leitrim.

A study of the 1659 'Census', undertaken by the Cromwellian surveyor Sir William Petty, reveals (O) Carroll as a 'Principal Irish Name' in the following counties:

Armagh, Down, Fermanagh, none.

R.E. Matheson's 'Special Report on Surnames...' (1874, 1909), based on births distribution in 1890, shows most registrations for Carroll in counties Dublin, Kilkenny, Cork, Tipperary and Limerick. Nationwide total 374. For McCarroll, births were all in Ulster and principally in Derry: total 13.

Maol Ruanaidh Cam [Ó Cearbhaill] (d. 1329) some say he was a native of Tipperary, and member of the Ely O Carroll clan. Friar John Clyn, a contemporary 14th century chronicler of Ireland, calls him 'Kam O Kayrwill' (Bernadette Williams Ed, 'The Annals of Ireland...' 2007). He played the 'tiompán' (a native Irish instrument) and Irish harp, and held a school for tiompán musicians. The 'Annals of the Four Masters' has this, dated 1328: 'sir John Mac Feoras...the most... hospitable of the English of Ireland, was treacherously slain by his own people...with him were slain many of the English and Irish, amongst whom was the blind O Carroll, recté Mac Carroll, that is Mulrony, chief minstrel of Ireland & Scotland in his time'. So, it would seem a Mac rather than an O Carroll?

Daniel Carroll (1730-1796) born in Maryland U.S., brother of the first Catholic bishop of the U.S., John Carroll. Daniel was a signatory to the Constitution of the United States.

Charles Carroll of Carrollton (1737-1832) a cousin of the above, he was the only Catholic to sign the Declaration of Independence. He became Senator for Maryland.

William Henry Carroll (1810-1868) was born in Nashville, Tennesee. He owned a plantation in his home state, and when Civil War broke out, became a brigadier general in the Confederate forces. He commanded the 2nd Brigade which fought at Mill Springs, Kentucky in 1862. After the war he removed to Canada, where he died.

Tell us about any famous CARROLL (or surname variant) you think we should add here. We will get our genealogists to check them out and add them to the list. Thanks!

Join the conversation with the CARROLL tribe

I was a bit surprised that County Cavan was not mentioned unless other Crrolls migrated there. What might have been their County of origin? Like another entry, my maternal grandmother's dad, James Carroll, Jr., was born in County Cavan. His DOBnwas November 11, 1833 in Maudabawn, Cootehill, Drumgoon Parish, County Cavan, Ulster Province, Ireland While Co Cavan is in Ulster Province it is part of the Republic of Ireland and not of Northern Ireland.

Good evening !My Carroll surname comes from some Wiresh Carroll that lived in Argentina in middle 1800s, and had a son Miguel Estevan around 1849 from her wife Carolina. I have found completely zero information about him. Can you help ? Regards !!

I want to connect with Carroll family Limerick. I have done a lot of 'digging' for information but there are gaps. Do you have a connection to Thomas William Carroll born 17/3/1879, Poona, India. His sister was Ellen Carroll born 6/4/1875, Deesa, India. She is my grandmother. Their mother was Mary who married Thomas Carroll a soldier in India and later married John Dowrie, also a soldier, in India. They retruned to live in Dixons Lane in limerick. The gap is who is Mary an how she was in India. Anybody????

Rich I am searching for birthplace of my g-grandfather Patrick Carroll born about 1828 somewhere in Ireland. He immigrated to the US in the mid 1850's. I am also searching for any Carroll family members in the I-P37 DNA Haplogroup. Thanks

Areas of Origin for CARROLL

Write an email address and click 'Invite' to share this page with more members of the CARROLL tribe.

Discover where the CARROLL Family members live around the world

Show off the CARROLL Family Crest…